Home American football Yes, Nick Mullens imploded. But others aren’t off the hook. 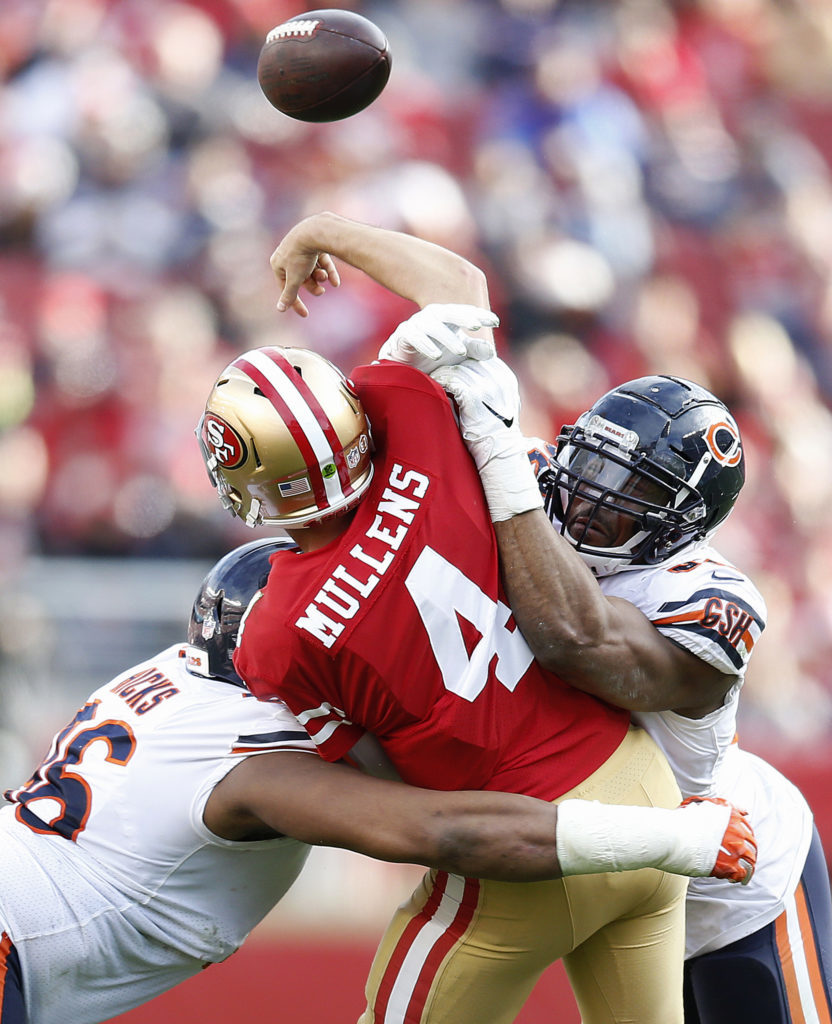 Nick Mullens had a tough day against the Eagles. But so did the 49ers defense. (AP Photo/D. Ross Cameron

Let’s take a break from bashing Nick Mullens for a moment, although I am sure we will get back to it.

Sunday’s 25-20 loss to Philadelphia was the first time this year the 49ers looked shell-shocked. This was supposed to be the glide path of the schedule. And although they lost the first game to Arizona, they’d just had back-to-back wins, defeating every professional football team in New York City.

Philadelphia, meanwhile, was winless, 0-2-1. However, something to keep in mind. At the end of the season, losing teams often quit and play like losers. But teams that get off to a bad early start may think they can turn it around, especially if, like the Eagles, a single win would put them in first place in their division. They played hard.

And yes, turnovers killed the Niners. And no, for as long as I have been watching football, I can’t explain how quarterbacks regularly throw passes right to defenders standing directly in front of them. That Mullens pick-six was about as bad as it gets.

But I would like to step over to the other side of the football and pick up on something linebacker Fred Warner said after the game.

“We kept them on the field for way too long,” Warner said.

It’s true. And this wasn’t the first time. At important moments, the 49ers defense is finding itself unable to get the other team to give up the ball.

For example, at the start of the third quarter, Mullens put together a nice, now-forgotten drive. The 49ers, you’ll recall, were trailing 8-7 when they got the ball. It was the march that had everything — a shovel pass, a jump shot pass that traveled two yards — and lots of lots of George Kittle.

It concluded, 75 yards after it began, with a who-else touchdown pass to Kittle. That put the 49ers ahead 14-8, and things were looking much more like we expected.

So that would be the time for the defense to swarm the opponent, stop them dead and let the offense ring up some more scores.

However, the opponent remained un-swarmed. Instead, Philly’s Carson Wentz embarked on a long, weird drive. It wasn’t so much the length and time of it, but the number of times San Francisco could have had them stopped.

Philadelphia twice converted third-and-ones. They had Wentz trapped in the backfield on third-and-nine and he ran out of danger and upfield for eight yards, then converted the fourth-and-one.

Eventually Philadelphia had to settle for a field goal, but they held the ball for 16 plays and seven minutes and 31 seconds. That’s a great way to wear down a defense.

And it continued. As we got to the Fourth Quarter, and the Mullens meltdown really began in earnest, there was another telling sequence.

It began when, given a golden opportunity to extend the lead, Mullens took over near mid-field. As you recall, he was sacked, the ball popped out and Philly took over in 49ers’ territory.

What happened next goes in the score book as a pretty routine 42-yard drive, but there was a lot more to it. Wentz converted third-and-six to start, then got stuck in fourth-and-four. He went for it and a completed a quick route for a first down. Pinned back with second and 22, Wentz ran all over Santa Clara and threw an incomplete pass. That would have set up third-and-22, but the defense was called for not one, but two defensive penalties for a first down.

Wentz then dropped back and threw a little parachute of a pass, 42-yards, for the touchdown to make it 18-14. It’s the sequence that changed the game and a direct result of a defense not able to get the Eagles off the field.

With the meat of the schedule arriving soon, that has to change.

Now, as for Mullens, it is always going to be uphill work for him. He’s not very big. (Seeing Wentz reminds you how helpful it is to have a tall, strong QB.) And despite all the stories about Mullens’ improved arm strength, you don’t write those about guys who can throw it through a wall to start with.

I would just say I genuinely felt sorry for him in that game. Yes, we probably got a little carried away with the “second starting quarterback” narrative. And as frustrating as it can be to see fumbles and what-was-he-looking-at interceptions, I can promise you that no one knows better than the quarterback what colossal screw-ups those are.

Oddly, I’m a little conflicted on Kyle Shanahan bringing in C.J. Beathard. Not that he’s not a great story. Don’t forget he also has a recent, wrenching tragedy. His brother, Clayton, a singer and songwriter, was fatally stabbed outside a Nashville bar last December.

He spent the off-time building up his body. He’s fit, and as he said after the game, now that he’s been in the system four years, he’s much more confident that the poor guy who was thrown into the 6-10 and 4-12 seasons in 2017-18. He looked great.

Being pulled from the game will surely not help Mullens’ confidence. What a head-spinner it has been for him. Three days ago you wouldn’t have to look far to find someone who thought he should start instead of Jimmy Garoppolo. Now he’s apparently battling for the backup job.

Finally, I’d say this. You hear it all the time about what a good guy so-and-so is. It’s one of our sports memes. But in the few times I’ve talked to Mullens, he really does seem like a genuinely good guy. I even met his mother on the sideline before one game. They seemed like a nice, and very proud, family.

Which means I have to repeat my favorite Mullens story. A couple of us were standing at his locker after practice, in the days when you could still do that. And the player at the next locker (Robbie Gould?) said, “Did he tell you he’s having a baby tomorrow?”

What? Yep, Mullens said. They were having a C-section and the time was set for tomorrow morning. So he probably should be heading home, unless anyone has any more questions?

So I’d like to see him do well. On the other hand, this ain’t beanbag. If you want sentiment, rent a movie. Everybody on the 49ers is hired and paid to win. And it better start happening if this season is to be salvaged.

49ers stick together – and win

How I Train – Helen Davies

Minnesota Timberwolves Are Reportedly Still Undecided On Number One Pick In...