IS ROGER MAYWEATHER WORTHY OF THE IBHOF?

Loved reading the piece that Lee Groves put together about the Black Mamba earlier this week.

In the article it was questioned whether Mayweather would be worthy enough to someday be inducted to the IBHOF. While even though I believe he has a strong resume as a boxer. I would say no solely as a boxer but yes if you combine both his boxing and trainer careers together.

Just wanted to get your opinion if possible. Take care and I hope you and yours are safe and healthy during these difficult times we’re all experiencing. – Eli, Austin, TX, USA

We’re doing fine during these trying times, so we’re blessed. Thank you for the well wishes.

I might be in the minority, but I think Roger is at least worthy of being on the International Boxing Hall of Fame ballot for what he accomplished as a fighter.

He shared the ring with two all-time greats – Julio Cesar Chavez (twice) and Pernell Whitaker – and while he was clearly defeated, he had his moments (dropping Sweet Pea, and competing in spots during his rematch with JCC). He also took hall of famer Kostya Tszyu the 12-round distance when he was totally shot.

He upset Sammy Serrano, a seasoned, well-traveled and underrated world titleholder, in just his 15th pro bout to earn the WBA 130-pound belt. And, during an eight-bout win streak between his losses to Whitaker and Chavez (rematch), he won the WBC 140-pound title and defended it four times, including decisions over respected veterans Harold Brazier and Vinny Pazienza. 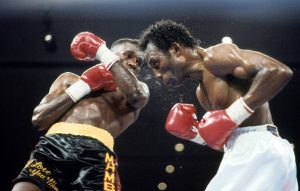 He earned his “Mexican Assassin” moniker with victories over Mexican standouts, including Mario Martinez (decision), Rene Arredondo (TKO, for the 140-pound belt), Roldolfo “Gato” Gonzalez (TKO) and Oscar Bejines (RTD). And the list of titleholders and legit top-10 contenders he shared the ring with goes on forever, but includes borderline hall of famers Rocky Lockridge and Vinny Paz; plus Serrano, Brazier, Arredondo, Freddie Pendleton, Rafael Pineda, Sammy Fuentes, Zach Padilla, Tony Baltazar and Kenny Baysmore. Did he beat all of these badasses? Nope. He took his share of losses, but he was a perennial contender over three weight classes throughout the 1980s and early ‘90s and he was always a threat.

After his first loss to Chavez (who brought a 46-0 record to his 1985 WBC 130-pound title challenge), Mayweather’s very next fight – just four months later – was against the formidable Martinez (who had a 38-2-2 record at the time), at the Olympic in Los Angeles! He won a hard-fought (but expertly boxed) split decision in front of a decidedly (as you can imagine) pro-“Azabache” Mexican crowd. That move and result sums up his fighting mentality and legacy.

Time will tell if Mayweather gets on the ballot as a fighter or trainer, but I think voters should have the opportunity to consider him.

A quick request. With no fights being on, I’m trawling Youtube for classic fights (like everyone else) in an attempt at improving my education.

Can you give me your opinion on which 2 fights I should watch for each of the following fighters in two categories: best fight (win or lose) and best showcase for their skills:

I won’t ask you to check if they’re available on Youtube, obviously, as that’ll be way below your pay grade. Thanks. – Matt

LOL. Thanks, Matt, but I’ll check YouTube anyway out of curiosity.

SRR – Best fight: Carmen Basilio – take your pick of either bout – both 15-round middleweight title bouts, contested in 1957 and ‘58 when a past-prime Ray was 37 years old and a veteran of almost 150 pro bouts, were Ring Magazine’s Fight of the Year.

Skill showcase: Jake LaMotta VI – A still-prime Robinson, despite 11 years and 124 bouts (121-1-2) into the pro game, puts on a brutal boxing clinic vs. his rugged and crafty crosstown rival (and fellow ATG) and forces a bloody stoppage to win the middleweight crown for the first time in 1951.

Pernell Whitaker – Best fight: Roger Mayweather (1987 NABF lightweight title bout) – an uncharacteristically aggressive Sweet Pea (just 11-0 and still developing as a pro) takes the fight to the former 130-pound beltholder as he outpoints the technically sharp and dangerous veteran over 12 rounds. Both boxers visit the canvas during the spirited chess match, which was enhanced by the lively hometown crowd (for Whitaker).

Skill showcase: Julio Cesar Chavez (1993 WBC welterweight title defense) – A mature and settled down Whitaker takes a fellow ATG to school over 12 brilliant rounds in hostile territory (San Antonio) with the deck decidedly stacked against him.

Bob Foster – Best fight: Doug Jones – a still-green prospect version of Foster (just 9-0) is game and skilled (for his experience) but is overpowered and eventually overwhelmed by the light heavyweight/heavyweight contender in 1962, who was just five months away from giving a young (17-0) Cassius Clay hell in a 10 rounder that would be The Ring’s Fight of the Year for ’63.

Skill showcase: Dick Tiger – Foster’s 1968 light heavyweight title victory against a fellow ATG, who was brutally KO’d in Round 4.

Ricardo Lopez – Best Fight: Rosendo Alvarez II – the 1998 rematch of their controversial first bout, in which his nemesis and fellow unbeaten strawweight beltholder weighed in at 108 pounds and gave him hell once against, this time over 12 bloody rounds, which the Mexican master edged by split decision. It was Lopez’s final bout at strawweight.

Skill showcase: Pick any one of his WBC 105-pound title bouts, apart from the Alvarez fights, he’s the same technical perfection in each one. The “Nene” Sanchez bout (WBC-WBO unification) is on YouTube, so you might as well go with that one.

Salvador Sanchez – Best fight: Danny Lopez I – Sanchez’s sensational introduction to a mainstream U.S. boxing fan audience in 1980. The Mexico City master (only 21 at the time) stopped the always game and feared defending WBC featherweight power puncher in Round 13.

Come to think of it, you can switch those bouts if you want – the Lopez bout can easily be Sanchez’s “skill showcase” and the Gomez showdown can qualify as the “best fight.” You know, in my book, the hallmark of a truly great fighter is being able to entertain as he or she displays their ring craft. That’s something all of the fighters you brought up have in common.

Bored working from home, so going to be cheeky and shoot for two mailbags in a row.

First wanted to ask about Ring Rankings. In some divisions where top fighters are yet to compete against each other, it can be difficult to determine the best fighter in the division. Based on the Ring Rankings, put of the top four fighters in each division (either the Ring Champion and top 3 contenders or top 4 contenders in divisions with no Ring champion), who do you think is the top fighter in each division? I’ve left my picks below, interested to see if you agree (left out divisions I don’t follow that closely)

Second, as you’ve probably noticed from my previous emails, I’m a big fan of Josh Taylor. I’ve been following the sport since I was 16 (coming on for 9 years now) and have lots of favourite fighters from various weight classes and eras but Taylor is special to me. Taylor is a fighter that I’ve watched grow from newbie into world champion alongside my growth as a fan of the sport. Scotland has a history of being sporting underdogs (check our Rugby team) and it’s been a frustration as a Scottish sports fan so see our guys always fall at the final hurdle. It’s been great to see a Scottish athlete in Taylor finally get over the this and truly become the best in the world (love Ramirez but Taylor is better). Can you think of any fighter that you have similar feelings or a connection with, and if so, why?

David Haye vs Shannon Briggs (the one that fought Foreman)

Thanks for the response to my email in the Friday Mail – sorry about the length. – Euan, Dunfermline, Scotland

Mikkel Kessler vs Steve Collins – I’ll take the Celtic Warrior over the Viking Warrior via majority or split decision (if in a neutral site) in an, obviously, hotly contested distance bout.

Tony Bellew vs Badou Jack @175 – Bellew holds Jack to a controversial (and entertaining) split-draw that most observers think the hard-working Swede deserved to win. 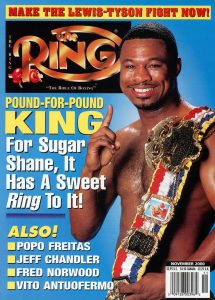 Dougie witnessed Sugar Shane’s rise from prospect all the way to the pound-for-pound throne.

Fighters I’ve had a special connections to over the decades include Sugar Shane Mosley (because he’s the first prospect that I followed as a fan and covered as a brand new member of the media who had world-class potential and more than lived up to it), Lamon Brewster (who I always liked, believed in and rooted for, even when most of the boxing world gave up on him) and Edwin Valero (who I recognized as a special talent early in his pro career, followed closely when he was in boxing limbo, and covered when he made his world-title runs).

My choices for top fighter in the boxing weight classes you selected:

Email Fischer at [email protected]. Follow him on Twitter and IG at @dougiefischer, and join him and Coach Schwartz and friends on Periscope every Sunday from SMC track.

Conor McGregor praises ‘incredible’ UFC ahead of UFC on ESPN 8: ‘There is light at the end of this tunnel’

Eddie Hearn announces plans to host fights in back garden

Kings vs. Pelicans: How to watch & game thread